Difference between revisions of ".it"

.it is the country code top-level domain name (ccTLD) for Italy. Its operations are managed by the Registro.it (NIC-it).[2]. It is the fifth largest ccTLD registry in Europe.[3]

The IANA recognized.it in December, 1987, and delegated the function of registry management to the CNR (Consiglio Nazionale delle Ricerche - Italian National Research Council). In 1997, this responsibility passed to the Institute for Applied Telematics (IAT-CNR) and, thereafter, to the Institute of Informatics and Telematics (IIT-CNR), founded in 2002 by the merger between IAT and the Institute of Computational Mathematics. The .it boom occurred in the late 199os, while current registration is at about about 20,000 domains per month following the removal of restrictions of total registration volumes on companies and individuals, in 2000 and 2004 respectively.[3]

The screenshot below is an excerpt of the study of the .it registry on the distribution of the .it domain names in Italy. The study was presented in 2011. The visual shows that .it domain names are mainly registered in certain regions of Italy, while there is an extremely low penetration in the southern region.[4] 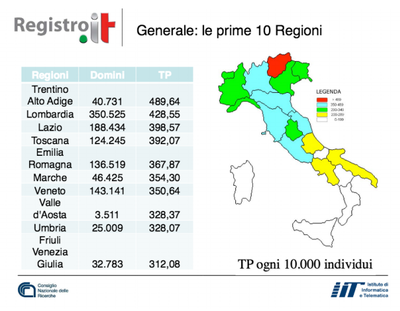 The first .it IDN name, registered in three seconds, was perché.it, followed by perchè.it, a misspelling of the former. Common words were registered in the first hours, along with accented words that are usually devoid of accents, such as "agentì", "pizzà", and "ìtalià". Non-Italian proper nouns were also registered in their native tongue, in the case of IDNs related to Austria -- österreich.it -- and the German city Cologne -- köln.it.[5]