Difference between revisions of "ICANN Bylaws" 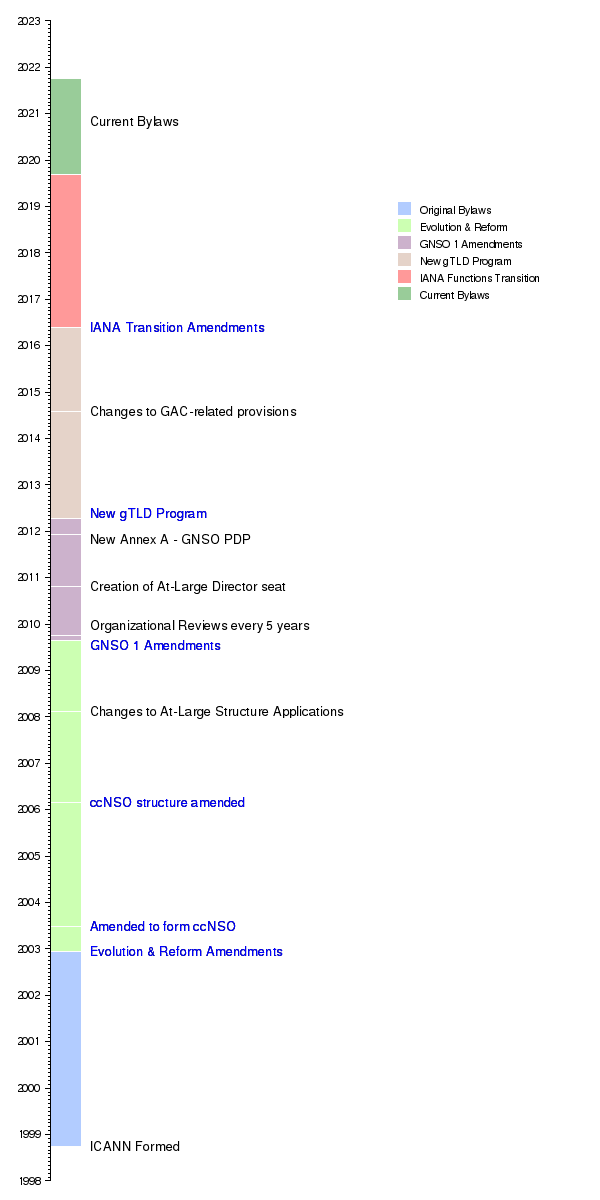 The Bylaws for Internet Corporation for Assigned Names And Numbers is the foundational governance document for ICANN.[1] The bylaws define the mission of ICANN, establish rules for the structure and operation of the SOs and ACs, and establish mechanisms for community engagement with the ICANN organization. The bylaws have undergone numerous revisions over the course of ICANN's history in response to reform efforts, policy development processes, and recommendations from organizational and specific reviews.

The current version of the ICANN Bylaws can be found here.

Initially, ICANN's bylaws were similar to many young nonprofit organizations, with some specialized articles. Provisions that specified procedural and operational components of the organization, that might otherwise be defined by a statutory default, were included.[2] The original bylaws anticipated the formation and operation of three supporting organizations: the Address Supporting Organization, the Domain Name Supporting Organization, and the Protocol Supporting Organization. In addition, the bylaws made it possible for the board to form and empower committees, and set the stage for three advisory committees to be formed: the Governmental Advisory Committee, the Root Server System Advisory Committee, and an advisory committee on membership, until such time as the question of At-large representation was answered satisfactorily.[2] As events arose and the ICANN community became more engaged with policy development and review functions, the bylaws grew and changed to more specifically describe and define ICANN's role, obligations, and process.

Prior to 2002, the bylaws did not contain any mention of the organization's mission, or its core values.[2] During the 2002 Evolution and Reform Process, the Evolution and Reform Committee (ERC) recommended the inclusion of these sections to enshrine the guiding principles and goals of ICANN in its governance documents. At the time of the December 2002 omnibus amendments to the bylaws, the mission and core values sections were added as the new Article 1.[3] The organization's mission statement was defined within the narrow scope of coordination and protection of "Internet's unique identifier systems." The article specified:

1. Coordinates the allocation and assignment of the three sets of unique identifiers for the Internet, which are: a. Domain names (forming a system referred to as "DNS"); b. Internet protocol ("IP") addresses and autonomous system ("AS") numbers; and c. Protocol port and parameter numbers.
2. Coordinates the operation and evolution of the DNS root name server system.

This mission statement remained the same until the IANA Functions Stewardship Transition, which among other things incorporated the Affirmation of Commitments into the bylaws, and anticipated the creation of a subsidiary entity under ICANN to manage IANA functions oversight. In October of 2016, Article 1 was amended to describe the broadened scope of ICANN's Mission:

(i) Coordinates the allocation and assignment of names in the root zone of the Domain Name System ("DNS") and coordinates the development and implementation of policies concerning the registration of second-level domain names in generic top-level domains ("gTLDs"). In this role, ICANN's scope is to coordinate the development and implementation of policies:

*For which uniform or coordinated resolution is reasonably necessary to facilitate the openness, interoperability, resilience, security and/or stability of the DNS including, with respect to gTLD registrars and registries, policies in the areas described in Annex G-1 and Annex G-2; and *That are developed through a bottom-up consensus-based multistakeholder process and designed to ensure the stable and secure operation of the Internet's unique names systems.

The issues, policies, procedures, and principles addressed in Annex G-1 and Annex G-2 with respect to gTLD registrars and registries shall be deemed to be within ICANN's Mission.

(ii) Facilitates the coordination of the operation and evolution of the DNS root name server system.

(iii) Coordinates the allocation and assignment at the top-most level of Internet Protocol numbers and Autonomous System numbers. In service of its Mission, ICANN (A) provides registration services and open access for global number registries as requested by the Internet Engineering Task Force ("IETF") and the Regional Internet Registries ("RIRs") and (B) facilitates the development of global number registry policies by the affected community and other related tasks as agreed with the RIRs.

(iv) Collaborates with other bodies as appropriate to provide registries needed for the functioning of the Internet as specified by Internet protocol standards development organizations. In service of its Mission, ICANN's scope is to provide registration services and open access for registries in the public domain requested by Internet protocol development organizations.[4]

The October 2016 amendment also added some provisos and clarifications regarding the mission. Article 1.1(b) through (d) state: that ICANN shall not act outside its mission; that ICANN has no governmental regulatory authority and shall not regulate the use of or content transmitted via the Internet's unique identifier system beyond the scope described in Article 1.1(a); that no registry or registrar can challenge the validity of its agreement with ICANN on the basis that the contract is contrary to ICANN's mission; and similarly, that no party can claim that ICANN's 2016-2020 strategic plan is contrary to its mission.[4]