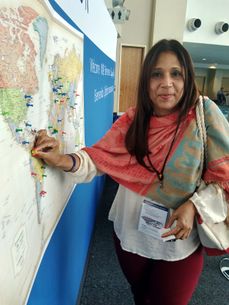 Lilian Ivette De Luque Bruges from Colombia, attended ICANN 61 as a Global Indigenous Ambassador. She is a Social communicator - journalist. She has been working for 10 years on issues of digital government and digital inclusion of vulnerable communities especially indigenous, as well as co-owner and consultant of the computer security company Muusa Colombia. She has been involved in ICANN since the beginning of 2018, first as a member of LACRALO through the ALS Ageia Densi Colombia of which she os their representative before this RALO, and then she became more committed to the community as a fellow of the program Global Indigenous Ambassador in ICANN 61 Puerto Rico. She also participated as a fellow at the meeting of ICANN 63 in Barcelona, this was my second experience as part of the fellowship program. Her commitment to ICANN has been strengthened after my participation in this meetings and as part of the ALAC Sub-Committee on Outreach and Engagement, Social Media leader volunteer LACRALO, and Consolidated Policy working groups. At this moment with people from various parts of the world we are working on the creation of the ISOC SIG Rural Development, also she is a member of an association of journalists and does humanitarian work in my indigenous community. She is a member of the ISOC global chapter, founder member of ISOC Colombia Chapter, also she is a member of the SIG Cybersecurity and SIG Women Chapters of ISOC. Member of the LACNIC discussion groups on policies, Security, IPV6 and IT Women, is am a member of the CIOs network of Colombia and the Internet Governance table of Colombia. 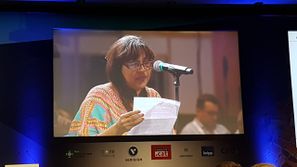