The Middle East and Adjoining Countries (MEAC) DNS Study 2015 analyzes the MEAC region's domain name industry and registration data as it relates to the larger global internet environment. MEAC contains a structured survey of ccTLD registries in the region, supplemented with interviews with registries and registrars, and also offers suggested actions to stimulate wider uptake in the region.[1]

The recommendation to conduct this study was one of the outcomes of the Middle East Engagement Strategy, which was developed by a group of community members in the region, and defined three strategic focus areas for the region. One of those focus areas, which was to develop the region's domain name industry, is covered by this study.[2][3]

ICANN first called for proposals for the study in March 2015, and requested that reports be submitted no later than October 9th.[2] In June 2015, the .eu registry, EURid, was selected by ICANN to conduct the study.[4]

For the General Internet Ecosystem[1]

For the Domain Name Markets[1] 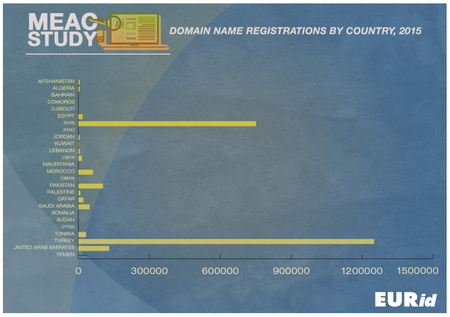 Full Sites vs. Parked Sites in MEAC and Beyond[1]

Comparative TLD Pricings in Africa, Europe, and MEAC Regions
Some registries charge what Janelle McAlister of MarkMonitor calls "unreasonable" prices, sometimes well over $100 USD and as high as $200 USD -- even if most were in the range of $35 to $55 USD. The images below capture sample pricings as of September 2015.[1]

MEAC Countries and the Socioeconomic Environment

The region covered in the MEAC Study covers a large geographic expanse, from the Atlantic coast in the West to the Hindu Kush in the East. Linguistic diversity includes several languages sharing Arabic script, such as Arabic, Urdu, Farsi, Dari, Pashto), and others (such as Turkish) written in Latin script.[2]

At the request of ICANN, the MEAC DNS Study focuses deeply on the following countries: Afghanistan, Egypt, Iran, Jordan, Lebanon, Morocco, Pakistan, Saudi Arabia, Tunisia, Turkey, Qatar, and United Arab Emirates. The online population across the region varies greatly, from as low as 6% in Afghanistan) to 88% in United Arab Emirates.[1]

Literacy rates are essential for participation in internet usage. Countries like Afghanistan and Pakistan may face greater challenges in getting its population online than countries with higher literacy levels, such as Jordan and Lebanon.[1][8]

High linguistic and cultural homogeneity result in high instances of local language web content, which in turn is a good marker of local domain name uptake in associated countries. It can be projected that countries like Egypt, Iran, Jordan, Morocco, and Turkey will thrive in local internet content growth more than countries with a more diverse population base and high percentage of migrant workers, such as UAE or Qatar. Possible distorting factors, however, include international sanctions or local laws which bar local applications from being available.[1]

Linguistic homogeneity is defined by the percentage of population speaking national language at home, according to statistics queried from Ethnologue,[9] and cultural homogeneity comes from UNESCO's 2009 World Report on Cultural Diversity 2009.[10]

The data presented in the MEAC DNS Study was gathered from a combination of:[1]

The users surveys were conducted in English, French, and Arabic, through a mixture of online forms and telephone interviews, and were administered by local companies and partners. 702 respondents from 15 countries in the MEAC region answered 24 questions about the use of online payment systems, online activities, and preferred languages. Though the sample size was large enough to draw tentative conclusions across the region as a whole, the small number of individuals per country does potentially distort results, as large shifts in percentage may come from relatively small movements of numbers.[1]

92% of the responses were received from those within the age ranges of 15-44, with ages 45 and upward less well-represented with only 8%, which may perhaps reflect the young population of countries in the region and the slow uptake of web usage amongst older generations. Users were asked to identify themselves by internet governance categories such as "government, private sector, civil society, academic or technical community", but responses revealed that people did not understand these categories.[1]

ccTLDs in countries like Iran, Morocco, and Tunisia publicly publish their registration data, yet many of their statistics have only figures on the day consulted and lack historic or IDN data. Other registries in the region do not publish any statistics. Therefore, the MEAC DNS Study team, used existing resources and contacts from their ten-plus years of work in the ccTLD and IDN space. This included a long-term project called the EURid-UNESCO World Report on Internationalised Domain Names, as well as work with organizations like CENTR, LACTLD and APTLD. Therefore, the MEAC DNS Study benefit from these contacts; all ccTLD registration data in the study, including IDN data, either results from direct registry contact between June and September 2015, or from publicly available information from registry websites.[1]

Entire Data Set
All gTLD and open zone file domains were captured in June 2015, producing about 156 million entries. For privacy purposes, the team avoided doing large-scale WHOIS lookups, and supplemented them only when unavoidable. They recorded the following metrics for each domain name:[1]

Identifying privacy/proxy registrations in the region was a large challenge, because hosting and registrant data are not guaranteed to be region-based. The team worked from a list of 500 popular websites and identified 4,832 unique domain names. They then gathered data through Alexa.com, performing WHOIS lookups to identify use of privacy proxy, country of hosting, website status and registrar of record. [1]

Regional Subset
For any domains that match one or more of the following criteria, a regional subset was produced:[1]

Arabic Subset
Many domains encountered in the subset produced only contained a small number of Arabic characters, so a further subset was created with those domains where at least 50 Arabic characters occurred on the webpage. These domains were checked to see if their HTML language attributes were set for one of the regional languages.[1]