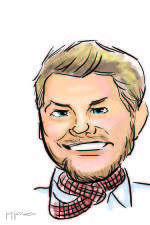 Daniel's Caricature from ICANN 52
Daniel Eisenhut is a domain industry veteran who co-founded New Zealand based domain registrar Moreweb NZ. Before moving to New Zealand, Daniel worked as CSO for Luxembourgish domain registrar EuroDNS. In this role he was responsible for sales and business development, managing the sales team, looking after international key accounts, business partners and clients, and creating customised solutions and products.

While Daniel grew up as an outdoorsman in the rural south of Germany, he quickly fell in love with the digital world after purchasing his first computer. He has since become a self-described geek. He enjoys driving fast, somewhere around 230 km/hr, on Germany's Autobahn.

ICANNWiki is a nonprofit organisation dedicated to providing a community developed wiki on ICANN and Internet Governance. We specialize in outreach, engagement and accessibility. Our mission to "give everyone a voice in the future of the internet" by providing educational resources, workshops and building a strong sense of community. (Learn More...)