The First Security, Stability, and Resiliency Review (SSR1) was initiated in 2010 and completed in 2012, with implementation of review recommendations continuing through 2015.[1] 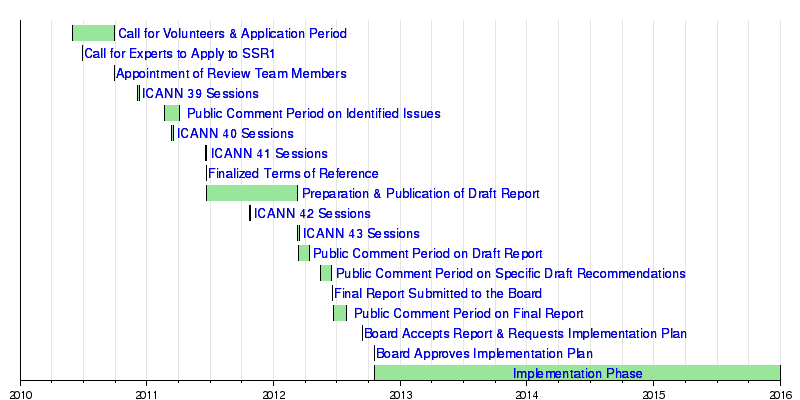 The Affirmation of Commitments, an agreement between ICANN and the United States Department of Commerce, establishes ICANN's obligations to perform its duties with specific commitments in mind. All of the commitments bear on public and consumer trust of the organization. ICANN is to perform its functions in a manner that:

ICANN is also charged to periodically review and assess its performance through the lens of each of the above commitments.[2]

ICANN's board enshrined these commitments (and the associated reviews) in its Bylaws in Article 1 (Mission, Commitments, and Core Values)[3] and in Article 4 (Accountability and Review).[4] Article 4.6 deals with "Specific Reviews," each of which are tied to one of the commitments in the Affirmation of Commitments.[5]

The Organizational Effectiveness Committee of the board oversees the conduct of specific reviews.[6] The SSR is one such review. The Bylaws contain specific requirements for the composition of the SSR review team, including a requirement that "independent experts" be appointed to the team.[5]

Within each of the issue areas, multiple topics were identified for the review team to examine as part of its fact finding.[11] The ToR formed the basis for dividing into three subteams, based around the topic areas.[12]

The review team published its draft report for public comment in March 2012.[1] The draft report listed twenty-eight recommendations based on the team's findings.[13]. A common theme was improving clarity of mission and messaging around each of the main topic areas.

ICANN staff also prepared and published a mission statement document for public comment in response to recommendations #1 and #3.[14] The statement was intended to refine and spell out ICANN's obligations and commitments to the stability, security, and resilience of the Internet's unique identifier systems. Public comment was substantial and largely positive toward the effort to clarify and synthesize ICANN's mission.[15]

The final report was submitted to the ICANN board and published for public comment in June 2012. Public comments on the final report were minimal: only ALAC, RySG, and Andrew Sullivan on behalf of Dynamic Network Services posted comments. These were largely congratulatory, with some issues raised regarding the clarity and purpose of some specific recommendations, and the need for close and nuanced reading of the report itself.[16]