Global Public Interest (GPI) is a belief in weighing the various interests at play, determining how to best serve the interests of the general public, and deciding by which means. It was foundational to the formation of ICANN and its commitments, and it is central to the Affirmation of Commitments, the ICANN Bylaws, and ICANN's Articles of Incorporation.[1]

ICANN was founded on the principle that the Internet should be a global resource. Since the Green Paper and White Paper, a foundational goal was to ensure representation of the entire global community. ICANN's Articles of Incorporation established the organization's commitment to the global public interest in its operations:

During the 2002 Evolution and Reform Process, the Evo & Reform Committee recommended the establishment of a mission statement and enumerated core values within the ICANN Bylaws. The bylaws as amended in December 2002 reflected the value of "[s]eeking and supporting broad, informed participation reflecting the functional, geographic, and cultural diversity of the Internet at all levels of policy development and decision-making."[3] The call to engage all corners of the globe is one aspect of service to a global public interest. However, the adopted core values name the "public interest" in another context: "Introducing and promoting competition in the registration of domain names where practicable and beneficial in the public interest."[3] These two values - global inclusion and competition & consumer choice - form a pair of values that could be seen to comprise the "global public interest." The values can be in competition, as one presumes participation by all who wish to engage, and the other defines its constituency as "consumers" - individuals who are entering the commercial sphere of domain ownership, management, or administration. As enshrined in ICANN's Articles of Incorporation, ICANN's technical obligations - to maintain a secure, stable, and resilient DNS - is also considered a protection of a global commons.

The 2009 Affirmation of Commitments further cemented these values. Section 9 lists the three commitments described above:

In 2010, in the wake of the Affirmation of Commitments, legal scholar Emily Wilsdon characterized the architecture of ICANN as a "hybrid public-private regulator:"

In the end, ICANN displays features characteristic of a hybrid public-private regulator. Authority is formally delegated by the US, but importance is placed on the acceptance of ICANN as legitimate by the wider community (including technical experts). It is formed as a corporation, and regulates on a contractual basis. However, it is charged (legally) with pursuing the global public interest due to the way in which it was set up as a non-profit organization, and is essentially a monopoly. Institutional design has been approached from the start, and through successive reforms, with democratic norms in mind.[5]

Wilsdon's assessment of the effectiveness of that model mirrored calls within the ICANN community at the time for increased transparency and accountability. The Affirmation of Commitments afforded an opportunity to further cement transparency measures and review into ICANN's practices.

The ICANN Bylaws first incorporated the phrase "Global Public Interest" in its October 2016 amendments, as part of the IANA Functions Stewardship Transition. The amendments were submitted by the Cross Community Working Group on Enhancing ICANN Accountability, who provided a general rationale for a variety of amendments to the Mission, Commitments, and Core Values sections of the bylaws:

Based on community input and CCWG Accountability discussions, it was concluded that these ICANN Bylaws provisions, which were originally adopted in 2003, should be strengthened and enhanced to provide greater assurances that ICANN is accountable to its stakeholders and the global Internet community.[6]

Seeking and supporting broad, informed participation reflecting the functional, geographic, and cultural diversity of the Internet at all levels of policy development and decision-making to ensure that the bottom-up, multistakeholder policy development process is used to ascertain the global public interest and that those processes are accountable and transparent;[7]

The "global public interest" also became a subject of the ICANN Board's deliberations on decisions, as well as a basis for the ICANN Empowered Community to object to board actions.[7]

In 2018, the ICANN Board identified the GPI as one of its 2019 operational priorities and carried it over to 2021. In September 2019, the Board published a discussion paper on a proposed GPI framework. 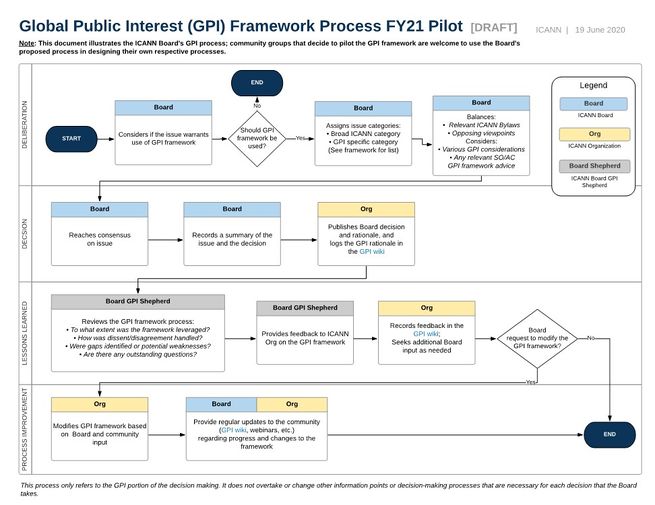 The GPI Toolkit, which is shepherded by Avri Doria in its pilot version application for the SSAD and SUBPRO ODPs, is meant to systematically assess the determination of GPI when considering new actions.[8]