Naseem Javed is the Founder of ABC Namebank, which he founded in 1982 in Toronto and New York. The company evaluates and offers services related to brand identities, naming architecture, and global cyber-branding and trademark solutions, and Javed himself advises CEOs and Fortune 500 Companies on global naming strategies.[1] Javed is a gTLD specialist and has written books on gTLDs and brand naming.[2] As a speaker, Javed has been invited to over 100 international conferences and has appeared on hundreds of radio and TV programs.[3] He also conducts online webinars via AZNA on topics such as the gTLD aftermarket boom, trade upswings, as well as business and marketing dilemmas related to changes in the rise of gTLDs.[4] 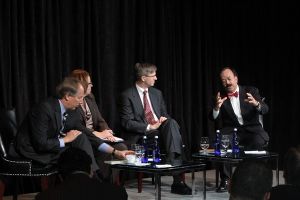 Mr. Javed was a moderator for an official ICANN educational event that was part of the "gTLD Roadshow," where ICANN CEO and other ICANN Staff traveled the world educating individuals and entities about the possibilities inherent in ICANN's New gTLD Program.[5] On the eve of the gTLD launch, there was an ICANN panel discussion about the key components of what Mr. Javed called the "upcoming global branding revolution." The 90-minute discussion took place at Newseum in Washington, D.C., and was webcast worldwide on January 11, 2012. Mr. Javed was the moderator, and the panelists included Rod Beckstrom (then ICANN CEO), Kristina Rosette (Special Counsel, Covington Burling), and Roland LaPlant (CMO, Afilias).

Early on in his career, Javed authored a 400-page reference manual entitled How to Name a Business or a New Product in 1979. In 1995, he wrote Naming For Power and Domain Wars, two books forecasting cyber-branding and what Javed calls "the dot.com epidemic".[6] His most recent book, Domination - The gTLD Name Game, discusses gTLD business models and naming issues, and was released in January 2012 via Metrostate Syndicate.[7]

He is also a contributing writer to CircleID[8], Adotas[9], creativebits[10], Business2Community[11], amongst others.